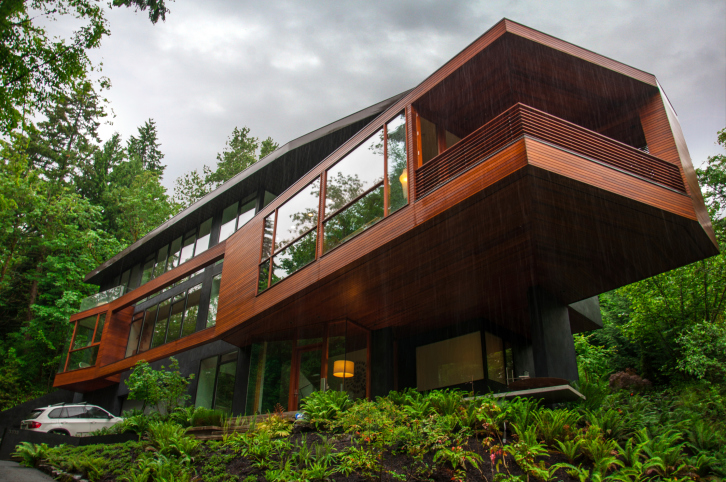 Our dream homes are often inspired by our own imaginations, from the homes we see in our own neighborhoods or the perfectly designed interiors we see in magazines.

However, sometimes our dream homes can be seen on a much larger scale, operating as the home to some our favorite movie stars. Check out these five amazing movie houses that film buffs commonly lust after!

The Alaskan Mansion in The Proposal: A Colonial Stone Paradise

In the hilarious romantic comedy The Proposal featuring Ryan Reynolds and Sandra Bullock, a gorgeous waterfront house acts as Ryan’s family house in Sitka, Alaska, nestled at the base of the mountains and featuring a pull-up-by-boat-only dock.

Though this house is just as incredible as it was portrayed in the film, its physical location is actually in Manchester, Massachusetts. The mountains were added using special effects, however, this natural stone house is just as lovely as seen in the movie.

The real thing is much more colonial in style, though, and much of the interior as seen in the film was created with a facade to create a more rustic feel.

The Fantastical Great Gatsby Estate: Better Than a Dream

Who doesn’t fantasize about throwing lavish parties in the castle-like mansion that played as Leonardo DiCaprio’s home in The Great Gatsby? Just as it might have been suspected, most of this castle is like something out of fantasy.

This house features an intricate pool, a two-story master bedroom, an incredible library with a winding staircase, and a grand ballroom. 42 different sets were built in Sydney to piece together this ultimate fantasy house.

The Cullen House in Portland, Oregon: A Log House With Style

Actually existing in real life is the magnificent house that was used as the Cullen house in the vampire movie Twilight. As a contemporary, ultra-modern log house – if you can call it that – the Cullen house drops jaws with its floor-to-ceiling windows that open it to its natural, woodsy surroundings.

The contemporary and beautifully designed interior is just as jaw-dropping, which was all completed in 2007 – just in time to make it to the big screen.

When Carrie walks into her soon-to-be apartment and exclaims “I think I’ve died and gone to real estate heaven!” we know that many of the women (and men) in the audience agreed.

Many of the interior sets were shot at Silvercup Studios in Queens, including the incredible entry and heavenly closet that Big builds for Carrie. Still, real or not, there’s no reason why you can’t aspire to reach this level of real estate heaven or own the closet of your dreams.

The movie that can never be forgotten, which sparked Brad Pitt and Angelina Jolie’s controversial – and lasting – relationship, is also one that presents a traditional American home that many lust after.

The house that plays as the family home to Mr. and Mrs. Smith resides in Pasadena, California, and offers many modern and contemporary design features. The home has many glass chandeliers, all of which are eventually destroyed in the characters’ “falling out.” Still, this movie house is a great source of inspiration for interior designers everywhere.

Wherever you get your inspiration from for your perfect dream house, knowing it’s a possibility is the most important thing. With your real estate agent on the lookout for you, it’s not only a possibility, it’s a high probability! Don’t wait any longer; contact a real estate agent today to find a piece of real real estate that will make you feel like a movie star.